You can think of the Lytics Canvas as an intelligent audience builder. When you create new Stages and add conversion events, you are effectively building new audiences based on the desired flow of users towards achieving your Goal. Unlike drip campaigns or more traditional journey builders, Lytics doesn't require you to build complicated audiences. Keep them simple, and the Lytics Canvas will do the heavy lifting for you.

Selecting audiences for your Goals

The following tips will assist you when building and selecting audiences for the conversion events and Experiences within your Goals. For an in-depth look at the logic automatically applied to audiences, see how audiences are used in the Canvas.

When you’re creating audiences to use in a Goal, it’s helpful to think about each audience as a "building block" rather than a complete definition of who you want to be targeting.

Below are examples of good building block audiences:

Users who have shared their email address

Users who have purchased something

Building block audiences work best when they don’t exclude anyone. It can be tempting to try to exclude users from a building block audience — for example, excluding “Known Users” from “All” in order to target only anonymous users — but the Lytics Canvas will do this for you automatically if one of your future conversion events is the audience "Known Users".

NOTE: If you do end up doing this yourself, you can create a “dead-end” path, where users are unable to progress due to the definition of the automatically generated audiences, which are explained in more detail below.

There is one important exception to this rule. If you want to suppress a subset of your entire audience from your Goal, you can exclude them from your "overall audience". This will work so long as the exclusion rule is not related to the downstream conversion events. An “overall audience” is the first audience you select on the Lytics Canvas, which is represented by the left-most blue circle as shown below.

For example, if you used the audience below as your overall audience, you would exclude "Realtors" from the entire Goal. This will not create a "dead-end" if none of the subsequent Stages have conversion events dependent on the "Realtors" criteria.

If you want to target with more granularity than a Stage audience allows, you can add a filter on individual Experiences within a Stage. 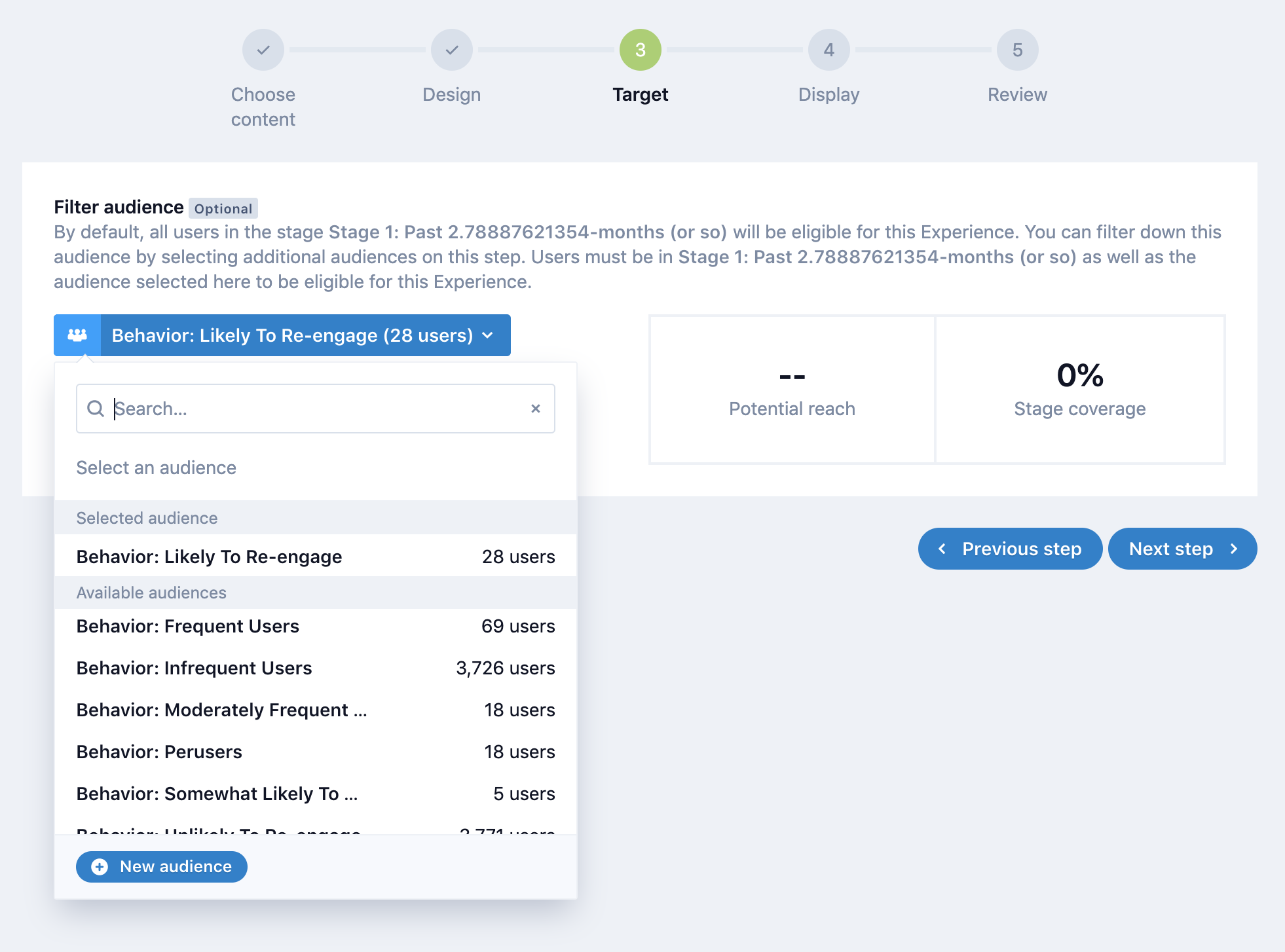 This is a great point to target users based on behavior, such as engagement level. The audience you choose here will be added to your Stage audience with an "AND" statement.

A common pattern may be that you want any users who converted on the Experiences in your Stage to enter the next Stage. Learn how to target users based on Experience interactions to build a conversion event like this.

How audiences are used in the Canvas

Now that you've learned how to select and build audiences, take a deeper look into how the Lytics Canvas uses these audiences to help users flow towards your Goal.

The Lytics Canvas automatically generates audiences based on your selected conversion events. For example, let's say you want to create a the first Stage to target users who haven’t shared their email address, and the second Stage will target known users who haven’t purchased yet. 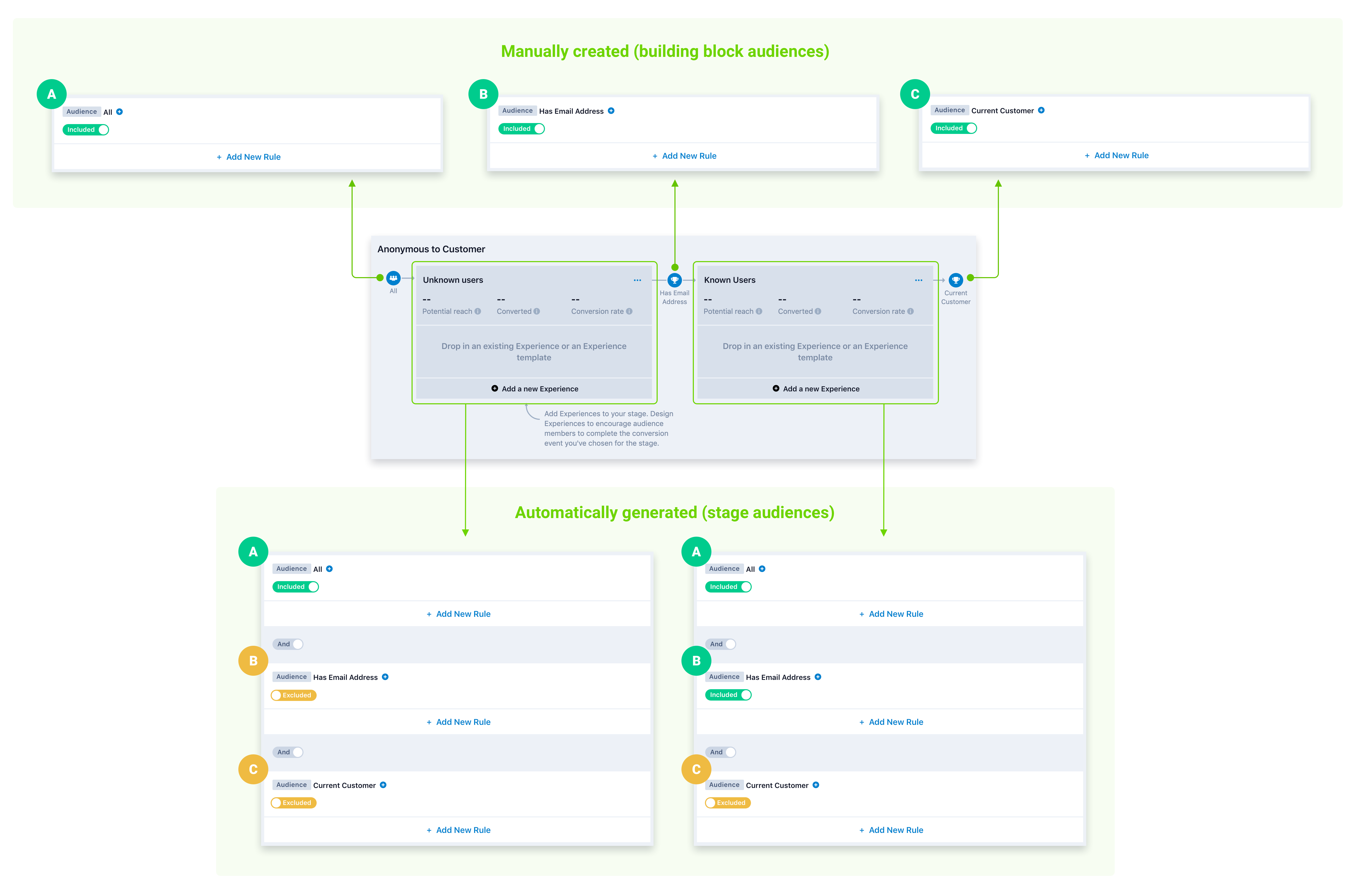 Remember, if you exclude converted users on a building block audience, it can cause problems and prevent users from moving between Stages. Let the Lytics Canvas do the work for you!

Stage audiences are mutually exclusive, meaning a user can only be in one Stage at a time. This is a result of the automatic audience building done by the Lytics Canvas.

If a user in “Unknown Users” shares their email and now qualifies for “Known users” they will automatically move into that Stage without any manual intervention.